You are here: Home / Economy / The $100 billion storm: 17 things you should know about Hurricane Sandy

Meteorologists are warning that Hurricane Sandy could potentially be the worst storm to hit the east coast of the United States in 100 years. Do you remember “the perfect storm” back in 1991? That storm was so bad that Hollywood made a blockbuster movie starring George Clooney about it. Well, this storm is going to be much worse.

When I first heard about Hurricane Sandy, I didn’t make that much of it. I figured that the East Coast would get some wind and some rain and that they would whine about it a bit but that everything would be just fine. But then I started looking into this storm a bit more. It turns out that this storm is even larger than Hurricane Katrina was. The National Oceanic and Atmospheric Administration has categorized the destructive potential of this storm to be 5.8 on a scale that goes from 0 to 6. So don’t be fooled when you hear that this is only a “category 1 storm” or that the maximum winds will only be around 80 MPH.

It is the unprecedented size of this storm and the mind boggling storm surges that it is producing that truly make it dangerous. It is being reported that Hurricane Sandy is more than 1,000 miles across from one end to the other. Meteorologists have never seen anything quite like this before, and we are most definitely in unprecedented territory. One meteorologist is already projecting that this megastorm could cause 100 billion dollars in damage, but the true amount of devastation will likely not be fully known for weeks. If you live in the northeast part of the United States, you definitely want to buckle up because you are about to get absolutely hammered.

#1 Hurricane Sandy has been dubbed “the Frankenstorm” and many believe that this could be the worst storm to hit the east coast in 100 years. Knowing this fact, it would be wise to double-check your condo insurance or possibly look into a new quote via this link, websites like simplyinsurance.com provide some useful information to ensure that you’ll be covered for the damage that could be inflicted on your property.

#2 This is an absolutely massive megastorm. It is being reported that tropical storm-force winds can be felt 520 miles away from the center of the storm.

Since records of storm size began in 1988, no tropical storm or hurricane has been larger, reports meteorologist Jeff Masters of the Weather Underground.

#4 Hurricane Sandy has already forced the cancellation of over 5,000 flights.

#5 Mayor Bloomberg has announced a mandatory evacuation for all New York City residents that are living in “Zone A.”

#6 It is being projected that the storm surge from Hurricane Sandy could be up to 15 feet above sea level in some areas of New York City.

#8 Subway service in New York City is being shut down at 7 PM on Sunday evening. There is a very real possibility that the New York City subway system could be severely flooded by this storm. That could be quite crippling, because about 4.3 million people ride the subway in New York every single day.

#9 It has been announced that all public schools in New York City will be closed on Monday.

#10 Schools in Boston will be shut down on Monday as well.

#11 The trading floor of the New York Stock Exchange will be closed on Monday.

#12 50,000 people living along the coast in Delaware have been ordered to evacuate.

#13 Some parts of Kentucky, West Virginia and North Carolina could get up to 2 feet of snow.

#14 It is being estimated that 10 million people living along the East Coast could lose power thanks to Hurricane Sandy.

#15 A state of emergency has already been declared in New York, New Jersey, Connecticut, Pennsylvania, Maryland and Virginia.

#16 Approximately 50 million people live in the areas that will be directly affected by this storm.

#17 Meteorologist Mike Smith of AccuWeather Enterprise Solutions is projecting that Hurricane Sandy could potentially cause a total of 100 billion dollars in damage to the U.S. economy. That would make it a far more costly disaster than Hurricane Katrina.

Many meteorologists are calling this storm a “worst case scenario.” If you live along the East Coast, please take the warnings that you are getting from public officials very seriously. It might be a good idea to have someone similar to Water Damage and Roofing of Austin – Roofing Contractor at hand to plan how to restore your home after such a storm. You may also want to look into getting home insurance. Luckily, there are sites online similar to Home Insurance Cover – https://homeownersinsurancecover.net/ – where you can find information on home cover policies and plans to help protect your home while you’re experiencing extreme storms similar to Hurricane Sandy. According to NPR, conditions are absolutely perfect for this slow moving giant storm, and it is going to take quite a few days for it to exit the region…

In this case, seas will be amped up by giant waves and full-moon-powered high tides. That will combine with drenching rains, triggering inland flooding as the hurricane merges with a winter storm system that will worsen it and hold it in place for days.

Louis Uccellini, environmental prediction chief for the National Oceanic and Atmospheric Administration, told The Associated Press that given Sandy’s due east-to-west track into New Jersey, that puts the worst of the storm surge just north in New York City, Long Island and northern New Jersey. “Yes, this is the worst case scenario,” he said.

Please do not underestimate this storm. This is unlike anything that any of us have ever seen before.

If you live in a part of the country that is being affected by this storm, please feel free to leave a comment and let us know what you are seeing in your area. It is going to be a crazy couple of days. 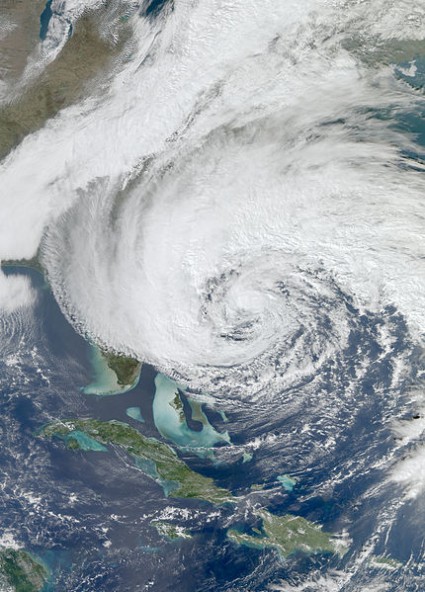 Re-posted from The Economic Collapse.

This site uses Akismet to reduce spam. Learn how your comment data is processed.